“Blending in” is one way to translate inculturation, the missionary strategy of the Jesuits. It enabled them to move just as efficacious in the Chinese emperor’s Forbidden City as in the French king’s palace at Versailles. But what about “defacing”? To enter the celestial court, the three Jesuit martyrs celebrated today had to change face, so it seems. Although Japanese, they have been systematically depicted as Europeans until the early twentieth century, by Flemish engravers, German frescoers, and Italian painters alike. Did they perhaps not know what the Japanese looked like? Unfortunately, they did, but they reserved these exotic facial features for the persecutors. The rare early works of art that show Paul Miki and his companions as the Japanese they were – protomartyrs of Japan even -, were made in Japan itself, and it is there, too, that their iconography has flourished most, ever since the twentieth century. (ML)
← New Anti-Ageing Skin Care for Antique and Rare Books Christian Sources : the Greek and Latin contributions to European culture → 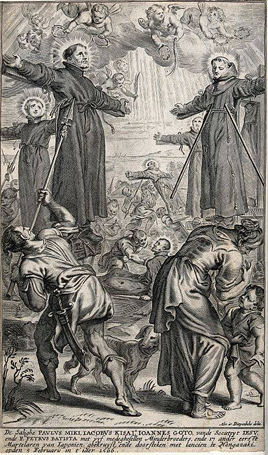