Following the enthusiastic reception of the two volumes of January, Bolland and Henskens started preparing the month of February, which appeared in three volumes in 1658; March (1668) and April (1675) followed, each in three volumes. The publication of May, in seven volumes plus a special volume dedicated to the chronology of the popes (1680-88), reflect a huge increase in the materials published. The main reason for this was a journey of two and a half years to Rome via Germany, Italy and France undertaken by Henskens and a new collaborator, Daniel Van Papenbroek. Between July 1660 and December 1662 the two Jesuits visited monasteries, convents, cathedrals and castles, explored their libraries, examined their hagiographic manuscripts and copied innumerable Greek and Latin texts, which complemented Rosweyde’s collection in Antwerp.

From that moment ‘literary travels’ would become traditional, not only for Bolland’s successors but also for other groups dedicated to erudition such as the Maurist Benedictine monks. If such travels made it possible to collect numerous texts at random, some of which would be published more than a century later, the preparation of a volume of the Acta Sanctorum often revealed the lack of some specific documents, which our hagiographers would try to obtain by writing to local scholars. A huge correspondence was thus exchanged between Antwerp and scholars all over Europe. 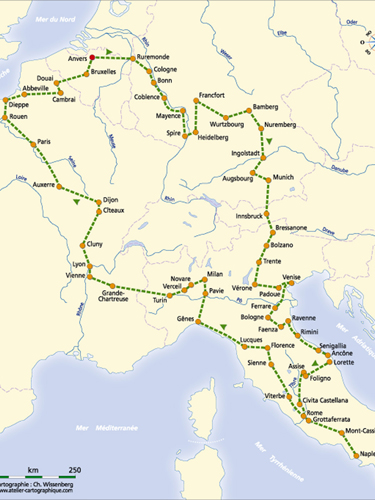 Researching the truth about saints also has its dangers. More than once the Acta Sanctorum would question the historical foundations of a popular cult or a venerable tradition. The worst incident occurred when Papenbroek expressed his doubts about the Carmelite tradition according to which the prophet Elijah was the founder of their religious Order.

The Carmelites managed to have the Acta Sanctorum condemned by the Spanish Inquisition in 1695. The decree, written in four languages:  Spanish, Latin, French and Dutch stated that the Acta contained “… propositions that are erroneous, heretical, smacking of heresy, perilous in matters of faith, scandalous, offensive to pious ears, schismatic, seditious, rash, bold…” The condemnation was lifted by Rome in 1715. 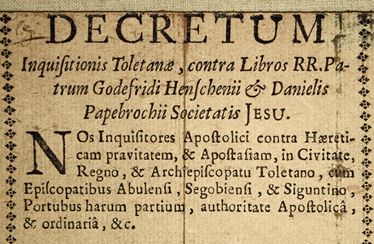 Illustrations appear in the Acta Sanctorum as from the volumes of April (1675). In the course of one century more than 680 of them were published. They represent portraits, monuments, objects, documents, inscriptions and are sometimes our only witnesses of long lost or destroyed buildings and works of art. Numerous copper plates that served for these illustrations are still in our possession.