From their very beginnings the Acta Sanctorum had always been a Jesuit work. Nevertheless, the suppression of the Society of Jesus in 1773 did not involve the immediate closure of the Bollandist enterprise. The government of the Austrian Low Countries was aware of its historical value and decided that the hagiographers, although they were no longer Jesuits, should complete the publication under some very restrictive conditions. They had to leave the Jesuit residence in Antwerp and transfer to the Coudenberg Abbey in Brussels in 1778.

When that establishment was closed in its turn in 1786, the surviving hagiographers were received by the Norbertine monks of Tongerlo, where volume 6 of October was printed. The French invasion and the consequent suppression of all convents and monasteries in 1796 seemed to put an end to the work. What remained of the library, one of the richest in Europe, was dispersed. 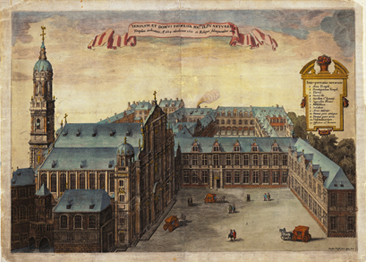