Rosweyde’s work was continued and expanded by his fellow Jesuit, Jean Bolland (1596-1665), a Jesuit from Julémont (Liège), who embarked upon the publication of the greatest ever collection of texts and critical studies related to saints: the Acta Sanctorum or “Acts of the Saints”.

The first two volumes of the Acta Sanctorum, covering the saints whose memories are celebrated in the month of January, were published in 1643. In the 2400 pages long volume, folio size, they studied no less than 1170 saints. Furthermore, Bolland decided that his scholarly endeavours would transcend any confessional divisions. He included in his study all the saints, men or women, from all times and all geographical locations. Those about whom, little was known, were dealt with in a short paragraph, while the saints who were known from one or more Lives were the object of a ‘dossier’ in which the text editions were preceded by a historical and philological study of the saint’s biography, his Lives and Miracles, and his cult. This decisive improvement had been suggested by Bolland’s first collaborator Godfried Henskens (1601-1681), a fellow Jesuit from Venray (Limburg). 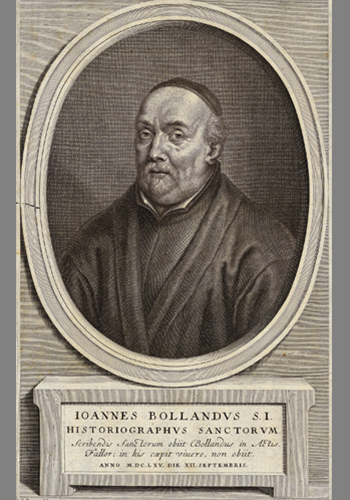