After the Society of Jesus was restored by Pope Pius VII in 1814 and the Belgian province recreated in 1832 (two years after Belgium’s independence), the decision was taken in 1837 to reconstitute a group of hagiographers in order to complete the Acta Sanctorum. Four Jesuits were designated and sent to the college in Brussels. The beginnings were extremely difficult since the library had been dispersed and the tradition interrupted. The personality of Victor De Buck (1817-76), a scholar trained in several disciplines including archaeology and canon law, dominated that period. Under his leadership and thanks to the collaboration of Ivan Martinov, a Russian Jesuit, the Acta Sanctorum extended their range to the saints of the Slavonic countries.

A fundamental renewal came with Charles De Smedt (1833-1911), who was well acquainted with the progress of the historical disciplines in Germany and in France. In order to bring the text editions of the Acta Sanctorum up to a higher critical standard a systematic census of hagiographic manuscripts was undertaken in Europe’s major libraries. Three Bibliothecae hagiographicae or repertories of hagiographic literature were compiled, in which all the Latin, Greek and Oriental texts ever written about saints before 1500 are described. In 1882 the first issue of Analecta Bollandiana, a journal of critical hagiography, was published; it was soon complemented by a series of books, Subsidia hagiographica. In 1905 the Bollandist library was transferred to a purpose-built wing of the new Collège Saint-Michel in Brussels.

It was in these new surroundings that Hippolyte Delehaye (1859-1941) joined the group of hagiographers. A most prominent Bollandist  whose work includes the critical editions with commentaries of the Synaxarium of Constantinople, the Hieronymian Martyrology and the Roman Martyrology as well as books about critical methodology in hagiography (Les légendes hagiographiques, 1905), historical syntheses (Les origines du culte des martyrs, 1912; Sanctus. Essai sur le culte des saints dans l’Antiquité, 1927) and monographs about the passions of the martyrs and their cults. His fellow Jesuit Paul Peeters (1870-1950) was a pioneer in the study of the Oriental hagiography. Vol. IV of the Acta Sanctorum of November (1925) reflects his extraordinary linguistic capacities with texts in Coptic, Arabic, Ethiopic, Syriac, Armenian and Georgian. 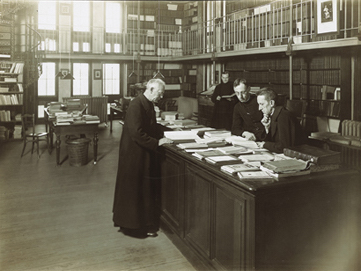